Noah Baumbach tells the story of a failing marriage with nostalgic cinema techniques that have won the hearts of the viewers. With Star Wars‘ Adam Driver and Avengers‘ Scarlett Johansson playing the separating couple, the strong performances have received Academy recognition. Driver has been nominated for Best Actor while his co-star, Johansson has been nominated for Best Actress.

The film opens with the pair, Charlie and Nicole Barber, discussing what they love about one another in a voice-over which runs out over the top of sweet family images of the couple with their son, Henry. However, the images soon become bittersweet as it is revealed that the voice-over is from a couple counselling session for the pair as they have run into problems. The counsellor has suggested that they write letters about what they love about each other in order to remind themselves of the good times instead of the bad.

Nicole Barber is an actress who took a step back from film and TV work when she met Charlie, a director for theatre productions. Together, they have a child and everything seems idyllic until the cracks start to show and apply pressure onto the couple. Nicole begins to realise that she sacrificed her dreams for Charlie and that she is gravely unhappy within the marriage.

From this moment on unfurls an emotional yet realistic rollercoaster which depicts the breakdown of a marriage between a couple who still have intense feelings for one another but simply can’t work things out. I use the word ‘realistic’ as the dialogue is not stylised in any manner and the viewers are made to feel as if they are flies on the wall, especially during the now iconic fight scene. For anyone who has either been a part of or has been a witness to the breakdown of a marriage, the film is a realistic depiction which can hit home to many.

My parents had a similar breakdown as Nicole and Charlie – my dad began to feel as if he couldn’t be selfish and had an affair with a woman much younger than himself. Despite this betrayal, my parents still remain friends and did throughout the entire process of the divorce – so to see moments where Nicole slips and accidentally calls Charlie ‘honey’ still resonated deeply within me. As I’m sure it would for many others. 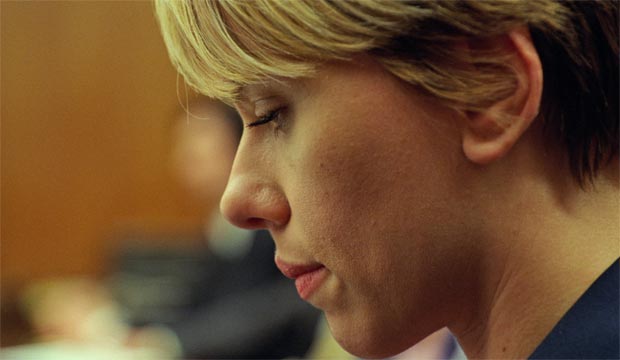 “I’ve had so many wonderful messages from colleagues and other actors and friends and family members that were just so touched by this film, by the love that remains between these two characters. It has a bitter-sweetness that just really affects them, and I think it’s wonderful to be a part of something like that.” – Scarlett Johansson.

One thing that I took from the film aside from the intense packing of human emotion was the timeless feel of it. Even though it appears to be set in modern day, the way that they are dressing and the way that they talk means that it could be set in any time period. There are no direct pop culture references that can so often make a film feel out-dated but I believe that this was an intentional decision. Heartbreak is timeless; even people in the Dark Ages would have been subject to heartbreak or the breakdown of a marriage.

The truth is that it doesn’t matter when the pair are going through it, just that they are.

Overall, I would rate the film ★★★★. It was poignant, haunting with memorable performances that will solidify the actors’ places in history.