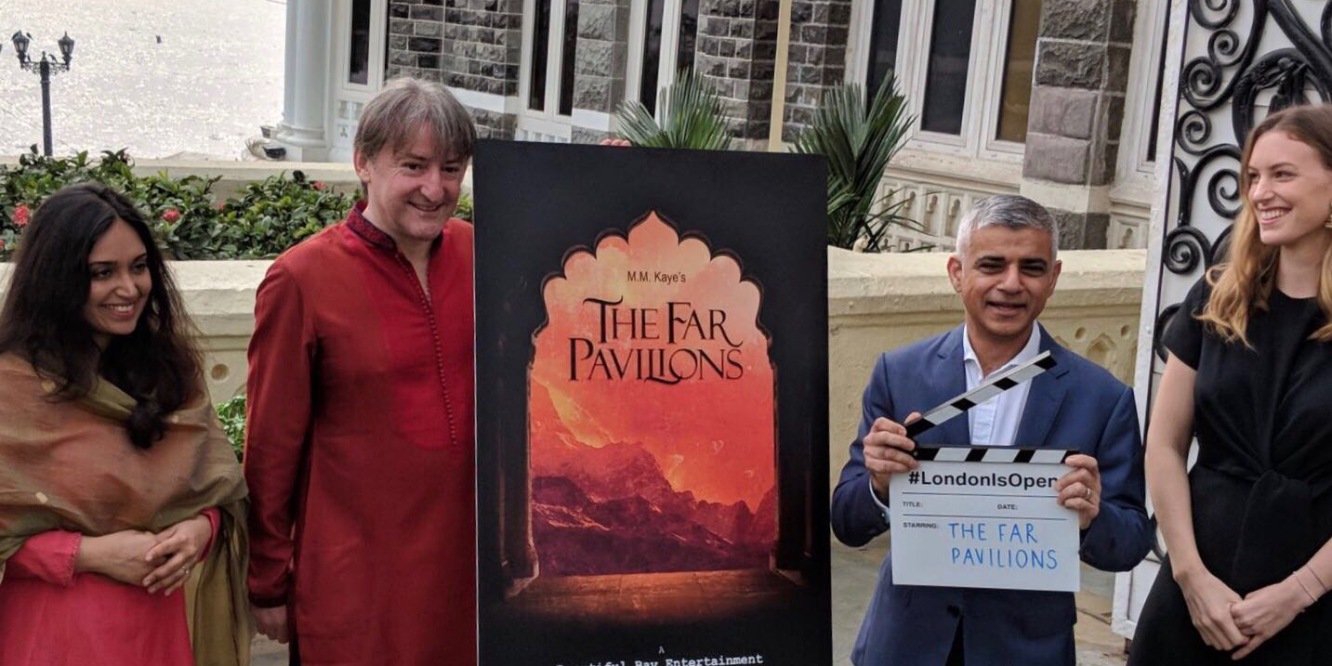 •  The 2018 remake of The Far Pavilions will be 30 one-hour episodes of high-end drama, combining top Indian acting talent and London’s world-class post-production skills

Mumbai, India – The Mayor of London, Sadiq Khan, today announced the biggest-ever TV co-production between London and India – a remake of The Far Pavilions, based on the novel by M.M.Kaye.

The co-production, worth a potential £113m ($150m), will be produced by Beautiful Bay Productions (Indian-based producer, Michael Ward and UK based producer Colin Burrows) and will feature the very best Indian on-screen talent. 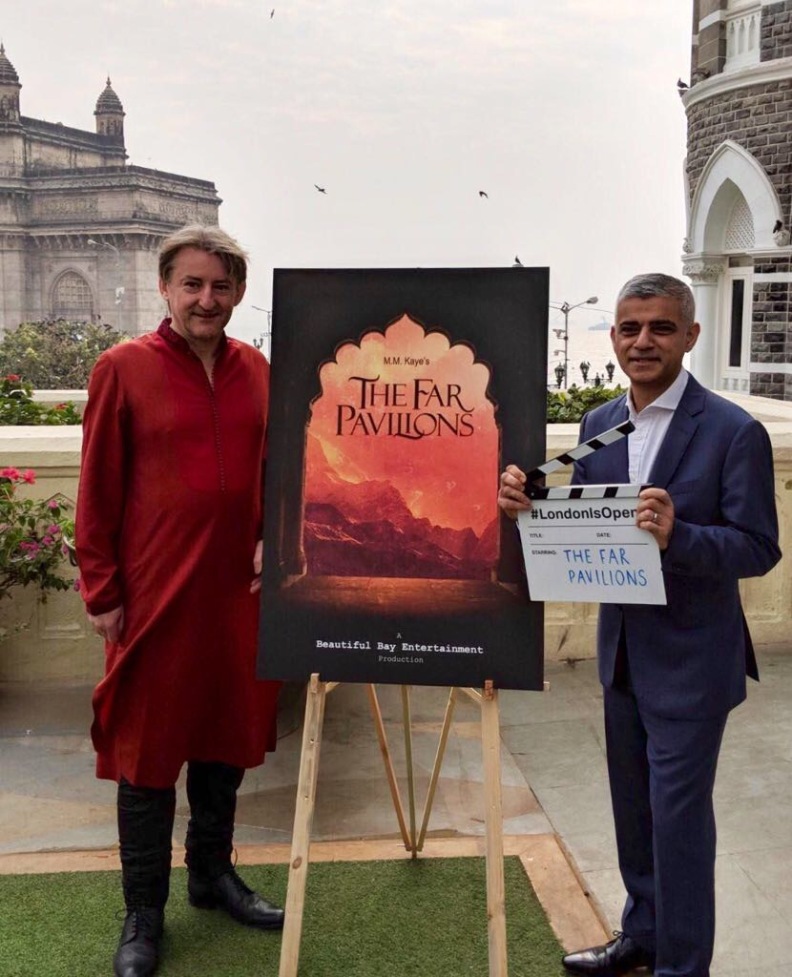 The unique collaboration will be produced by a creative crew which will include both Indian and British technicians. Post-production for the high-end drama will be based in London, the world-leading centre for VFX (visual effects) and post-production facilities.

The Far Pavilions was written by British author M.M.Kaye in 1978. This epic novel tells the story of an English man brought up as a Hindu during the British Raj, and his passionate love for an Indian princess. The It was turned into a three-episode mini-series in 1984, starring Ben Cross, Amy Irving, Omar Sharif and Christopher Lee. The 2018 remake will be much longer – running to 30, one-hour episodes. 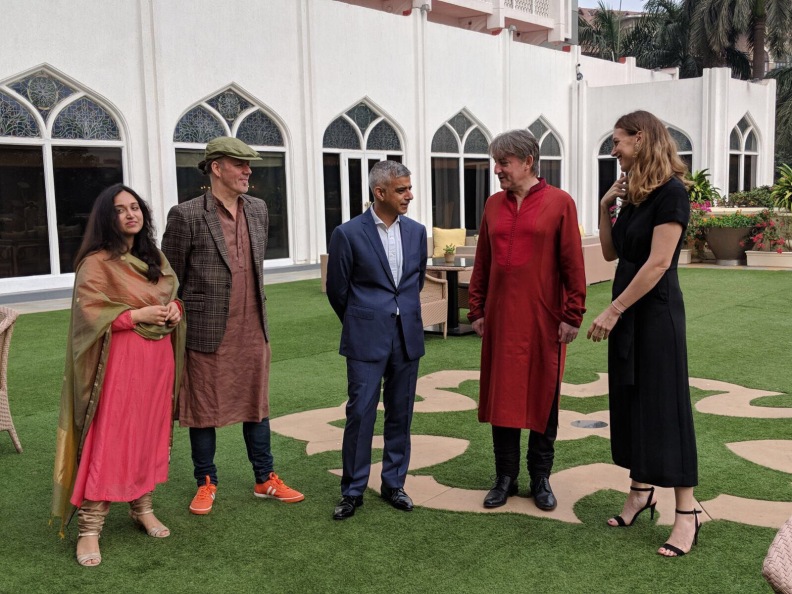 The Mayor made this landmark announcement in Mumbai during the UK-India Year of Culture. He met with prominent British people working in Bollywood, highlighting the longstanding cultural ties between the two film capitals of London and Mumbai. Alongside the producers Michael Ward and Colin Burrows, Sadiq met with film composer and music producer of Bombay Dub Orchestra and Bohemia Junction, Andrew T.Mackay, hair and make-up designer Clover Wootton and film director Pia Sukanya.

He also confirmed that Mumbai will be the first Indian city to join the World Cities Culture Forum, the leading collaborative network of world cities that share a belief in the importance of culture for creating thriving communities.

Sadiq Khan is on the second day of a trade mission to India as part of his continued drive to create jobs, skills and growth in London. The Mayor of London will remind everyone he meets that London is still the world’s number-one location for investment, talent and ideas, and he will say that people from all over the world remain welcome to work, study or visit his city. Sadiq is being accompanied by his Deputy Mayor for Business, Rajesh Agrawal, and his jam-packed itinerary, covering three Indian cities, includes discussions on business and investment, regeneration opportunities, visas and opportunities to work together.

More than 1000 films are produced in India every year, making it one of the biggest producers of films in the world. London is the third biggest film-making city in the world after LA and New York with an average of 40 crews filming in London’s streets every day. London has been a popular destination for Indian films for over 30 years. Around 20 Indian films have been shot in London in the last 12 months, including the huge box office hits Judwaa 2 and Mubarakan. The successful Indian comedy film franchise Housefull has returned to the capital for each of its three installments.

“UK and India’s film and TV industries have a long, proud tradition of working together. Whether it’s Bollywood hits such as Judwaa 2 and Mubarakan being filmed on the streets of London, or blockbusters like Slumdog Millionaire and The Best Exotic Marigold Hotel – British movies filmed on location in India – the creative bond between India and the UK is as strong as ever – and one I have been promoting during my Mayoralty.

“I’m delighted to announce this landmark collaboration on The Far Pavilions. It represents the best of British and Indian talent and sends a clear message to the rest of the world that London is open to partnerships, to collaboration, to creativity and for business.”

“Having based myself in Mumbai for most of the last decade, I’m excited to spearhead the Indian end of this international collaboration. It’s the perfect time to take my stage adaptation of Mollie Kaye’s masterpiece much further and deeper into its Indian cultural landscape, and to invite the best of Indian and British talents to contribute towards turning it into a high-end television series authentically written and cast for a global audience.”

“From this high-end adaptation of The Far Pavilions to our own micro-budget feature The Hungry, the exchange of talent, skills and business between the Indian and UK screen industries has enormous potential. This adaptation promises to be a sumptuous spectacle in its own right, but it’s also indicative of how our above- and below-the-line talent can come together to create a production that harnesses everything from Indian locations to London’s world-famous post-production expertise.”

Approximately three-quarters of the UK’s film industry is based in and around London, and last year £1billion was attracted to the city in inward investment from international film production.

Transforming London into the world’s most film-friendly city is a key priority for the Mayor, who recently announced plans for Dagenham East to become a world-leading destination for the production of blockbuster movies. This followed an expert study showing how the area is the ideal location for Hollywood-style studio space.